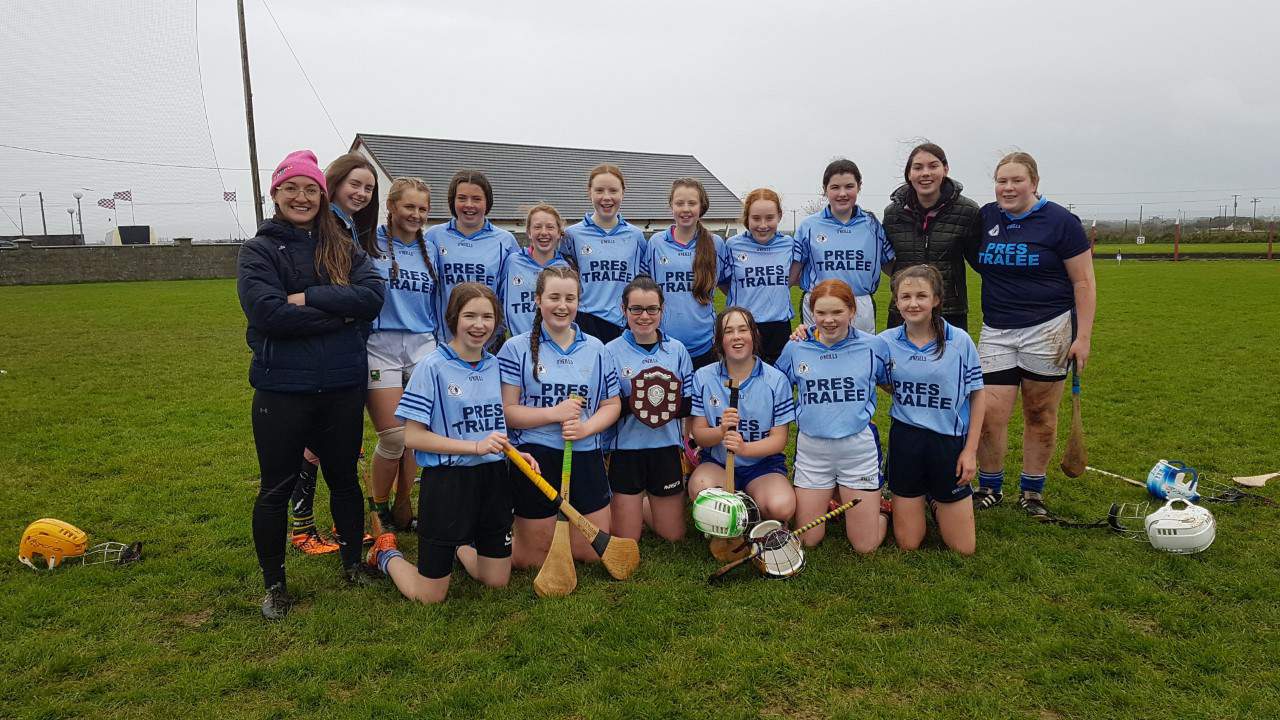 Our Pres Girls drew with Causeway Comprehensive 1 in the first match. Both teams put up massive defenses and when time ran out, there was nothing separating the sides at 2 goals each. This was followed by a narrow win over our neighbours from Gaelcholáiste Chiarraí after a last strike goal by Amy McCarthy. Next fixture was against the ever improving St. Joseph’s Ballybunion which Pres Tralee came out on top once again. In the A Semi Final, we faced Causeway Comprehensive 2. After a hard fought battle, Pres Tralee advanced to the final.

The A Final saw us face Mercy Mounthawk, a repeat of the final of the 2018 Winter Blitz the year before. Mercy Mounthawk had a comprehensive win over Gaelcholáiste Chiarraí in the other semi-final. The Pres Tralee girls knew they would have to ‘lift it’ (Ms. Sheehy’s favourite motivational line) in order to come out on top. As reigning champions, the pressure was on. The motivated warm up, led by 5th Year coaches Lia O’Connell and Aoibhe McKenna, concentrated on getting the team ready to fight for possession (I believe the coaches had too many cups of tea). The match began and we opened the scoreline with a goal from Lana O Connell. Captain Amy McCarthy after a solo run also hit the back of the net followed by a point from full back Amy Corridan. The second half saw another point by Amy Corridan and two goals by Alice O Connell and Shauna Harris. Long puck outs were collected by Caolinn Hickey which helped create scores. Bronagh Kelliher looked ever dangerous in both attack and defence as she was introduced. Protecting the goals was the focus for the defense. Saves made by Clodagh O’Sullivan and hard work put in defence from her back line (Amy Corridan, Ailisha Daughton, Shona O’Connor, Alyssa Leen O’ Shea, Danielle Griffin, Grainne Carroll) kept out an ever hungry Mercy Mounthawk. If you were an onlooker, you would see two very motivated teams who were there to play for each other, school, club and love of the game.

The scoreline finished 4-2 to 0-2, with Presentation Tralee’s captain Amy McCarthy accepting the plaque from Laura Collins Nolan (the plaque which Ms. Sheehy forgot and we had to turn back for. Whoops!).

A massive thanks is given to Laura Collins Nolan, Causeway Comprehensive, referees, umpires, caterers and supporters for the running of the blitz. Thanks to Powers Travel and parents/guardians for allowing us to have this team. Final thanks goes to all players and assistant coaches Ms. Finucane, Lia O’Connell and Aoibhe McKenna for their hard work and time.